Easter is coming! If you’re in a Spanish speaking country that means Semana Santa.

Here’s a bit about Semana Santa for all those looking to celebrate. 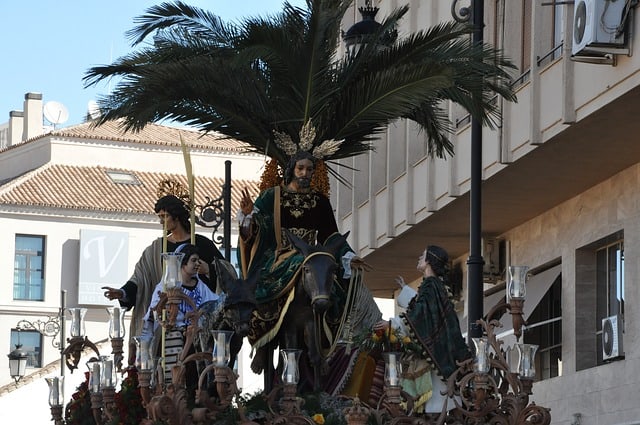 n an excerpt from Lonely Planet’s A Year of Festivals we look at the best ways to celebrate Semana Santa, one of the Catholic church’s most significant and colourful festivals.Location: Antigua, Guatemala and Seville, Spain. Seville’s carrera oficial (official route) begins on Calle Campana, follows Calle Sierpes to Plaza de San Francisco and then joins Avenida de la Constitución to the cathedral.

Level of Participation: 3 – plenty of opportunity to follow and enjoy the parades in both cities

Easter week is a big deal across the Spanish-speaking world but, an ocean apart, it’s Antigua and Seville that celebrate it with the most gusto. In the Americas, Antigua really comes alive during Semana Santa, when the streets are covered in breathtakingly elaborate alfombras (carpets) of coloured sawdust and flower petals. Dense clouds of incense envelop the streets and daily street processions remember Christ’s Crucifixion.

In these processions, dozens of penitents dressed in deep-purple robes carry floats bearing enormous statues of Christ, the apostles and the Virgin Mary – the most revered sculptural images from the city’s churches – and weighing more than 3 tonnes. Thousands of other penitents walk alongside, ready for their turn to carry the floats. The fervour and the crowds peak on Good Friday, when an earlymorning procession departs from La Merced church and a late-afternoon parade leaves from the Escuela de Cristo church.

In Seville the Semana Santa celebrations are similar, but arguably even more spectacular. Holy Week rites here go back to the 14th century but they took their present form around 300 years later, when many of the images – some of them supreme works of art – were created. For eight days (from Palm Sunday to Easter Sunday) floats with large, richly bedecked images and life-size tableaux of scenes from the Easter story are carried from Seville’s churches, following the shortest route through the streets to the cathedral.

In total there are around 115 floats, which are carried by around 60,000 hooded members of 57 religious brotherhoods, or cofradías. Each cofradía usually carries two floats, one containing a figure of Christ and the other with a statue of the Virgin. The processions are so long, and the floats so heavy (each bearer normally supports about 50kg), they may take more than an hour to pass, and are watched by vast crowds.

The most important of Seville’s Semana Santa processions takes place at midnight on Maundy Thursday (ushering in Good Friday). At this time there can be more than one million people lining the streets of the carrera oficial, watching as Seville’s six oldest and most respected brotherhoods – El Silencio, Jesús del Gran Poder, La Macarena, El Calvario, Esperanza de Triana and Los Gitanos – parade through the streets in a sombre procession that extends past dawn. The best way to view the processions is to pick them up in their own barrios (neighbourhoods) or as they leave or re-enter their churches – this is always an emotional moment.

Essentials: In Antigua, be sure to have ironclad room reservations well in advance of Semana Santa, or plan to stay in Guatemala City or another town and commute to the festivities. Beware of thieves – it seems that Guatemala City’s entire population of pickpockets shifts to Antigua for Semana Santa.

In Seville you can just stand along the procession route for the Good Friday parade, though crowds can make it difficult to get much of a view, unless you manage to get yourself a seat. Tickets for seats are sold at nearby ticket windows. Programmes showing each procession’s schedule and route are widely available in Seville before and during Semana Santa. El País newspaper publishes a daily route leaflet and ABC newspaper prints maps showing the churches, recommended viewing spots and other details.

Local Attractions: Antigua is nestled between three volcanoes. All three can be climbed, with guides available in the city. In town you’ll want to spend some time hanging about in Parque Central. On most days the plaza is lined with villagers selling handicrafts; on Sunday it’s mobbed with people and you’ll find the cheapest goods on Sunday afternoon, when the peddling is winding down. Seville’s cathedral is one of the largest churches in the world, and claims to contain the bones of Christopher Columbus (the Dominican Republic disagrees, saying it has the bones). The city’s other major monuments are the Giralda minaret and the World Heritage–listed Alcázar fort.